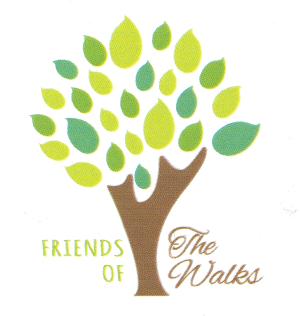 At last! The fruit trees have been planted in the Walks. Members of the committee were helped by one keen and interested supporter. Three trees (all dessert apples) were planted between the Multi Use Games Area and the ‘community allotment’. Thirteen more were planted along the extension to the Broadwalk between the hedge and the rear of the football ground. These consist of pears, plums, apples and a damson. Next year we are hoping for a flush of blossom and maybe some fruit. The final tree, a Morus Nigra (Black Mulberry), was planted close to the entrance to the Walks on the County Court Road side in a sheltered spot.

This project has been in the pipeline a long time but at least it has come to fruition.
October 2013

For sometime now the Friends have advocated planting fruit trees in the Walks. In the beginning this idea was given a cool reception by the Council. However, a couple of years ago an ‘in Bloom’ judge commented that he was surprised there were no fruit tree in the Walks. This caused the matter to be pursued by the Friends and to this end a grant was applied for. An amount of £200 was granted and it was estimated that this would enable the Friends to purchase eight trees. In the event we were able to buy twenty-two first class trees. These consisted of apples, pears, plums, gages, damson and a mulberry.

However, the Council insisted that only eight, the first estimated figure could be placed in the Walks. This created a problem. A solution was soon thought of. We have approached the vicar of St. John’s, the Church in the Walks, with a view to planting a small community orchard at the east end of the church. This is an ongoing situation which we hope will come to a satisfactory conclusion and that the trees, fourteen in all, can be planted in the Autumn.

The two walnut trees that we have been given will be planted in positions already agreed  – one beside the Red Mount, the other at the Seven Sisters’ gateway.
June 2013

The Saga Rolls On
However, we do hope that eight of the tree will be planted during September. As each of these trees is in a very large pot they could have been planted at any time but then, due to the very dry weather watering would have been a problem. Meanwhile the son of the chairman has been caring for them.

The negotiations to create a community orchard in the grounds of St. John’s church have foundered. The P.C.C. have said ‘NO’. One of the anecdotal rumoured reasons was that it would create ‘scrumping’. Surely this is a contradiction in terms as regards a community orchard. However the committee will press on to find ‘homes’ for the remaining fourteen. Has anyone out there any ideas. Perhaps the friends can persuade the Council to allow them to find spaces in the Walks, after all trees are more important than poles stuck in the ground.

Please await the next episode.
August 2013