Opening times for 2019 — Free Entry
South Gate is open every Wednesday, Saturday, and Sunday from mid-May until mid-September between 1pm and 4pm.
On Heritage Sunday opening times will be from 10am-4pm. 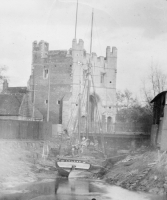 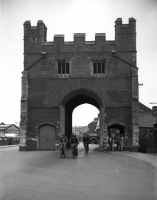 The South Gate is one of the most recognisable structures in King’s Lynn, as most visitors to the town still have to pass through it. Originally constructed in the 14th century, it was rebuilt in the 1450s, much in the form that is seen today. However the ashlar front, which gives the building a much more imposing impression, is merely a façade which was added in 1520; the structure itself is actually bricks and mortar, which given the date of construction makes it one of the oldest surviving brick structures in the country. It is a Grade I listed building.

Although the gate has stood largely unaltered since the 1520, it was modified later in the 19th century with the two smaller arches to the side of the main one. Whilst the main arch was used for horse drawn carriages, the smaller arches were intended for pedestrians – mainly the lower class. However, by the end of the 19th century the traffic demands had grown so much that in 1899 London Road was widened, and now the gate only straddles half of the road.

Today, traffic still passes through the arch to enter from the south. The structure is situated on London Road, one of the busiest roads in the town, meaning there is a constant stream of traffic through it during the day. Despite this the arch can comfortably fit most forms of traffic from articulated lorries to double-decker buses.

English Heritage Grade I listing details
South Gate to town. Late C13, in dangerous condition by 1416 and repaired with stone (surplus to requirements of the Lady Chapel of St Nicholas). 1437 Robert Hertanger was contracted to rebuild the gate and in 1520 the gate was substantially restored and partly rebuilt by Nicholas and Thomas Harmer, finally altered by provision of pedestrian doorways C19 and restored 1982.

3 storeys with set-offs between each floor. North side. Tall central pointed arch unmoulded to jambs, wave moulded to arch. 4-centred C19 pedestrian passage arches right and left, that to left blocked with a late C20 glazed door. Second floor with two 3-light round-headed windows under square hoods. Crenellated parapet with corner turrets at each corner. East and west faces without entrances but punctuated with single or 2-light windows.

INTERIOR. In 1841 the west side was a through passage and the winder staircase in north-west corner removed, replaced 1984 with a steel winder. Original disposition restored in 1984: rectangular heated rooms to ground and first floors at east and west sides, large upper room over entire width. West ground floor room. Fireplace in west wall under depressed 4-centred stone arch with hollow mouldings. Pointed brick relieving arch above. Former bread oven right of this and right again a lavabo with water outlets to outside. C20 bridging beams and floor above.

First floor rooms of similar disposition: a fireplace, privy hole and 3 circular gun-ports in splayed recesses. Second floor room with fireplaces to east and west walls, splayed window embrasures and rere arches and shallow pitched roof with 2 tiers butt purlins. Only one of the large tie beams is not of 1983-4. Scheduled Ancient Monument.