Opening times for 2019 — Free Entry
Red Mount is open every Wednesday, Saturday, and Sunday from mid-May until mid-September between 1pm and 4pm.
On Heritage Sunday opening times will be from 10am-4pm. 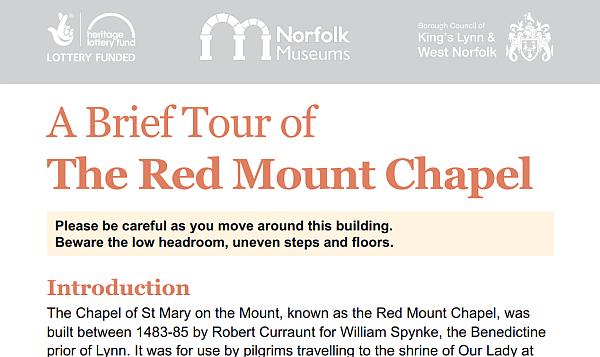 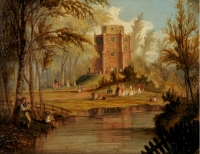 In the 1300s, Lynn, then known as Bishops Lynn, was the 3rd most important port in England. America had not been discovered so most trade was on the East coast connecting with Europe.
The Black Death came to Europe in 1349, the Children’s Pestilence in 1365 together killing almost 40% of the European population. For the survivors of these plagues the shortage of workers meant better terms of employment and living standards.
While the plagues continued, the Church did well as people were wiling to pay for indulgences to get through purgatory, or be spared the illness or death they feared.
By the 1400s the Church was “feeling the pinch” due to less money being raised so they need to look for new ways to raise funds.

Why did they need the money?
They were the first Social Services. Providing hospitality for travellers, food for the hungry, care for the sick, hospices for the dying and in some cases education for the young.
At first a “holy relic” was put in St Margaret’s church but as this was not successful another plan was needed. It was decided to build a “stopping off” chapel for pilgrims travelling through Lynn on their way to Walsingham, the second most holy shrine in England after Canterbury. The pilgrims came from all over England and Christian countries in Europe.
The chapel provided a “virtual” visit to Jerusalem for the pilgrims and also brought much needed trade to the town.

The fates have been kind to the chapel. It was not destroyed at the Reformation nor in the Civil War, German bombs missed it by a whisker in 1942 and the Heritage Lottery folk gave us £4m to restore the Chapel and the Walks around it.

Formerly known as: Chapel of Our Lady of the Mount THE WALKS. Wayside Chapel on Walsingham pilgrimage route. 1483-85 by Robert Curraunt, the chapel 1505-06, attributed to Simon Clerkand John Wastell.

Brick with ashlar dressings and ashlar core. Octagonal, constructed in the form of 2 concentric drums, the outer of brick. Roof not visible. Basement and 2 storeys to outer drum, a third to inner drum. Random bond brick. 2 set-offs. Corners supported by stepped buttresses with ashlar dressings with an arched opening punched through each. Main entrance to west via timber studded door set under a depressed arch. One trefoil niche right and left.

At intervals round the chapel are quatrefoil lights and 2-light mullioned windows, but the top floor of the outer drum is lit through a 4-light stone mullioned window with depressed heads beneath a straight hood mould, one such to each facet. Subsidiary door to north-east facet at ground floor, with, in the next facet clockwise, a 4-light stone mullioned window with hollow, roll and fillet mouldings. Inner drum emerges over roof-line as a stone cruciform illuminated through one encircled quatrefoil oculus to each of the 4 main facets.

INTERIOR. Arrangement is of a barrel-vaulted cellar below the twin drums, which are both octagonal below the ashlar chapel. Between the skins are 2 brick staircases with a roll-moulded handrail cut into inner wall. One starts at each external doorway and run counter-wise to each other, arriving at the antechamber to the chapel from opposing directions. Facing main door is a 6-light stone mullioned window with hollow and ovolo mouldings looking down into basement. 2 diamond pane leaded casements remain.

Central core is largely brick with ashlar dressings but gives way to ashlar with brick dressings in upper storeys, emerging as all ashlar at chapel. Ample evidence of breaks in the work at top floor of outer drum, and of a change in design. At intervals are good examples of C17 and early C18 graffiti. As staircases emerge at the chapel an ambulatory is formed, C20 timber steps leading into the cruciform sanctuary itself, which is attributed to Clerk and Wastell.